There is a long tradition in showing Francis associated with birds and ‘fluffy bunnies’ or the equivalent and the wolf [of Gubbio]. Although many people might dismiss such pictures as merely symbolic or even sentimental, I find such images deeply Biblical (see Isaiah 11.6; and, for the Song of the Three Hebrews, the Benedicite for example).

This little gem from a signet ring from Serbia depicts the Greek myth of Orpheus charming the animals with the beauty of his lyre-playing, a device which was sometimes employed by Christians to stand for the harmony of Creation. 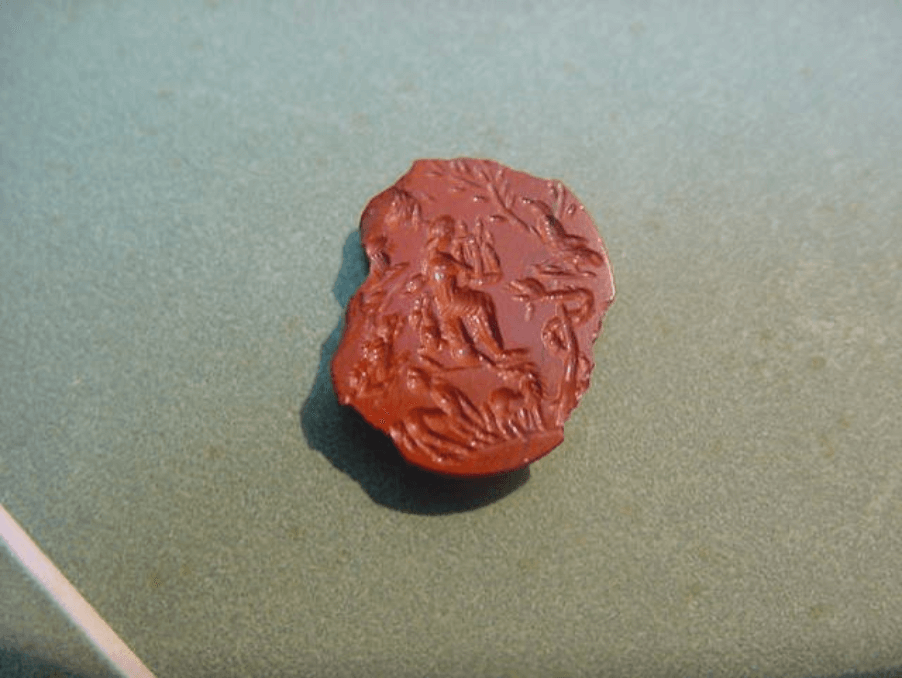 Amongst the listening animals are gentle quadrupeds but also a lion and a serpent. For a Christian this underlines the fact that all Creation was made by God, though a mature understanding tells us that the complex interaction of the system is often not good for individuals or indeed for entire species or indeed genera [think of the dinosaurs]. In human history, if we omit the direct evils humans have perpetrated on each other and they are legion [wars, genocides, slavery etc etc] we need to remember for example, as I do as a Roman archaeologist, the tragedy of the eruption of Mount Vesuvius which overwhelmed Pompeii AD 79 but there have been many similar events, earthquakes, volcanoes, tsunamis. There have also been ravages of disease which have affected Creation, plants as well as animals, from the beginning.

As I see it, we are one species that evolved from apes, also intelligent creatures though humans have not treated their nearest relatives at all well, let alone other creatures. We are inveterate speciesists who have created our own narratives to excuse ourselves.

We are now in the midst of a world-wide pandemic. For me there are two answers to COVID19. One of them is that it is simply part of the narrative of a creation in which somehow, through all the disasters (earthquakes and epidemics), the end point will be the salvation of all Creation. Through this ‘cloud of unknowing’, we, that is all Creation will find its destiny in God. as it does in John Donne’s great prayer:

Bring us, O Lord God, at our last awakening into the house and gate of heaven, to enter into that gate and dwell in that house, where there shall be no darkness nor dazzling, but one equal light; no noise nor silence, but one equal music; no fears nor hopes, but one equal possession; no ends nor beginnings, but one equal eternity: in the habitations of thy majesty and glory, world without end.

However, there is a second aspect, that is human agency, which links this epidemic directly to the evils humans have perpetrated on Creation itself. It seems that this epidemic started through one of the horrific wildlife markets in China, through the killing and eating of wild fruit bats. It could have come from the killing of pangolins, snakes or other creatures taken from the wild in appalling numbers and killed for human gratification. What started with individual evil and has affected millions.

I should add that it, or a similar pandemic, could just as easily have come and likely will in future if we do not change our ways, from the cruel way animals-pigs, calves and poultry, are treated in Factory Farms in the West. We exploit other creatures as commodity and that is a gross offence, a blasphemy against the Creator God, a sin against the Holy Spirit.

These words from the tragic ending of Shakespear’s King Lear (Act 5 sc.3) have come to mind since the pandemic  began:

Edgar:
The gods are just, and of our pleasant vices
Make instruments to plague us:
The dark and vicious place where thee he got
Cost him his eyes.

Before we simply comfort ourselves by moaning ‘poor little us’, it is worth considering this passage, chilling as it is.

Living in harmony with Creation, means it is vital to dethrone ourselves, our species from being more species than the ‘birds, the bunnies and the wolf’.

If we get through this great test thrown at our species, can we do better? Can we entirely restructure our lives so we do all that we can not to rape the earth, and to treat all our fellow creatures with love and respect and cease to exploit them, as we have done, day by day, year by year, century by century?

In the name of the Father and of the Son and of the Holy Spirit, Amen.